There is no doubt that football is the nation’s favourite sport – just last year, 26.5 million people watched England’s World Cup semi-final on ITV (about 40% of the population)*. I am well aware of the pride and emotional attachment fans have towards their teams, as my boyfriend is an avid Liverpool Fan. The week before the Champion’s League final were, to my dismay, deeply nerve-wracking for him.

His sentiments, I’m sure, were echoed by many Liverpool and Tottenham fans, sitting on the edge of their seats as the final drew closer. With so many people so invested in a singular event, many brands made a point of rolling out contextually relevant ads.

Amongst those well-timed contextual ads was one of our own, for our client Liverpool Gin Distillery. Only a few days before the match, we got in contact with Reach, who look after the Liverpool Echo. We chose the Liverpool Echo for their local popularity as the regional newspaper. We wanted to promote the Liverpool Gin Distillery to Liverpudlians as a place where they could go to watch the game with friends and family. To ensure the message could not be missed, we decided to book a high impact format for our first appearance, a Cover Wrap, which ran the Thursday before. This was then followed up with 3 Strips in Friday’s paper, and a Full Page in Saturday’s paper, to ensure we followed the hype. We also ran a Sports page Takeover on the Liverpool Echo website on the Saturday, to take advantage of increased website activity they were experiencing. 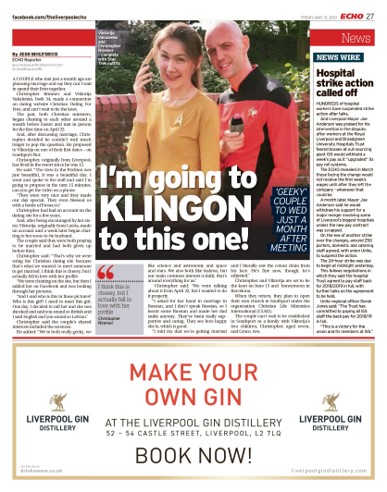 The reaction we got from the client was fantastic, and as you can see from the photos, the ads looked amazing! We were also told the Distillery was packed for the match – hope everyone enjoyed their Liverpool Gins.

Many thanks to Reach and Mojofuel who helped pull this together!